This book is written for busy professionals who need guidance on Delay Claims. The content is informed by intensive research conducted over many years aimed to simplify Delay Claims. The research produced a groundbreaking New Delay Analysis and formulation method. The method has been presented at numerous international conferences and is being utilized in several different countries. The easy to ready book shares information on the following key topics: - Basic and advance delay & delay analysis terminology- Delays causes (from 21 international studies on delays)- Analyze & Formulate claims for typical delays- 6 Easy Steps to Formulate Delay Claims- Explanation of common Delay Analysis Methods: -Planned vs As-Built-Impacted As-Planned-Collapsed As-Built-Window Analysis-Time-Impact Analysis- Explanation of Complex Delay Analysis Concepts -Cause & effect-Float ownership-Concurrent delays-Prospective and Retrospective delay analysis- 5 Easy Steps to Analysis delays with the new Method - How to apply this Method with construction Form Contracts - Minimize Disputes with the new delay analysis method Participants in the construction industry do not often have the time to read an entire book on a specific subject. The book is written in such a way that it can be utilized for an in-depth study into delays or as a quick reference guide for the assessment or formulation of delay claims. Practical examples are utilized to explain the delay concepts.This guide can be helpful in a number of ways to all people who at some stage or another are faced by the challenge a construction delay presents. Firstly, it will simplify the process of analysis of delay claims for those responsible for the arduous and time-consuming task. Secondly, the guide will also be helpful to the contractor to understand how delay claims are evaluated and how to formulate claims. The content is grouped in short chapters to ensure the guide can be utilized without necessarily reading all the chapters.-The basic terms, definitions, and concepts of construction delays are explained in Chapter 2. This forms the foundation the remaining chapters built upon to ultimately unveil the groundbreaking delay analysis method that was developed after several years of intense research. -What are the predominant causes of delays in construction projects? The findings of 21 independent studies on delays conducted in 16 different countries are discussed in Chapter 3. Guidance is also provided on how delay claims on each of the typical causes of delay should be dealt with. This is a very valuable tool in the assessment of delays or for the formulation of delay claims.-Chapter 4 summarizes the delay analysis methods currently utilized in the construction industry. The critique of the methods will come in handy when a choice of the delay method for a claim needs to be made.-Chapter 5 is the heart of the guide and describes the new delay analysis method in detail. This chapter will assist practitioners to navigate this potential minefield of complexities in the process of the assessment of delay claims. It also explains how to write a delay claim in 6 easy to follow steps.-Chapter 6 and 7 applies the new delay analysis method to some of the common form contracts utilized in the construction industry today.The delay analysis method described in the book is unique in that it assists practitioners holistically, incorporating all considerations in the analysis process. Other forms of guidance produce to date are mostly focused on the assessment of the criticality of the delay.

'About Time' provides a practical reference for all those working in the building & civil engineering industry who need to understand delay claims. Whether you are an industry professional, architect, engineer contractor or expert witness assessing a claim, it will provide you with clear explanations.

Delay and disruption in the course of construction impacts upon building projects of any scale. Now in its 5th edition Delay and Disruption in Construction Contracts continues to be the pre-eminent guide to these often complex and potentially costly issues and has been cited by the judiciary as a leading textbook in court decisions worldwide, see, for example, Mirant v Ove Arup [2007] EWHC 918 (TCC) at [122] to [135] per the late His Honour Judge Toulmin CMG QC. Whilst covering the manner in which delay and disruption should be considered at each stage of a construction project, from inception to completion and beyond, this book includes: An international team of specialist advisory editors, namely Francis Barber (insurance), Steve Briggs (time), Wolfgang Breyer (civil law), Joe Castellano (North America), David-John Gibbs (BIM), Wendy MacLaughlin (Pacific Rim), Chris Miers (dispute boards), Rob Palles-Clark (money), and Keith Pickavance Comparative analysis of the law in this field in Australia, Canada, England and Wales, Hong Kong, Ireland, New Zealand, the United States and in civil law jurisdictions Commentary upon, and comparison of, standard forms from Australia, Ireland, New Zealand, the United Kingdom, USA and elsewhere, including two major new forms New chapters on adjudication, dispute boards and the civil law dynamic Extensive coverage of Building Information Modelling New appendices on the SCL Protocol (Julian Bailey) and the choice of delay analysis methodologies (Nuhu Braimah) Updated case law (to December 2014), linked directly to the principles explained in the text, with over 100 helpful "Illustrations" Bespoke diagrams, which are available for digital download and aid explanation of multi-faceted issues This book addresses delay and disruption in a manner which is practical, useful and academically rigorous. As such, it remains an essential reference for any lawyer, dispute resolver, project manager, architect, engineer, contractor, or academic involved in the construction industry.

Contracts can be your first line of defense against delays. But they have to be drafted very carefully. Construction Delay Claims gives you an in-depth analysis of all the pertinent clauses and details what they can and can't do to minimize delays and avoid litigation. Construction Delay Claims, Fourth Edition, by Barry B. Bramble and Michael T. Callahan is written for everyone involved with delay and impact construction claims--the most common form of disputes in the construction industry. You'll find that this resource presents the most thorough, detailed review of delay claims liability available, including a complete description of the entire process for filing and pursuing claims along with more than 1,950 cases and analyses. Construction Delay Claims gives you the information you need to determine your best course of action. the book presents detailed knowledge drawn from the authors' thirty-five years of experience in the industry. You'll learn how to anticipate delays and mitigate damages through the use of advanced planning and immediate responses by the parties involved. You'll also receive helpful instructions about the best use of construction schedules to avert delays, or to prove their impact if they do occur. Construction Delay Claims keeps you completely up-to-date with the changes in the construction industry, and the construction litigation process. Coverage includes: Effective ways to challenge a claimant's use of the Total Cost Method of Calculation The effectiveness of "no damages for delay" clauses The use of ADR methods to resolve delay claims The meaning and implication of concurrent delays Cumulative impact effect of multiple change orders The impact and probability of delays in design-build, construction management, and multiple prime contracting Latest research into the effect and measurement of lost productivity The most recent assessments of how states are applying the Eichleay formula

Provides the most authoritative and comprehensive coverage of delay and disruption in construction contracts and related issues. 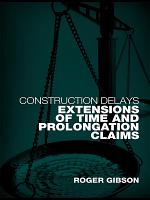 This book provides guidance on delay analysis, particularly in relation to extension of time submissions. It gives readers the information and practical details to be considered in formulating and resolving extension of time submissions and time-related prolongation claims. Useful guidance and recommended good practice is given on all the common delay analysis techniques, and worked examples of extension of time submissions and time-related prolongation claims are included. Written in a practical and user-friendly style, the book includes helpful charts and graphics. It will be useful for construction professionals dealing with extensions of time and delay claims, and for lawyers and others who are involved in the contentious side of the construction and engineering industries. Roger Gibson has over 40 years of planning & programming experience in the construction and engineering industries. During the latter part of his career his has received many appointments as an Expert in time-related disputes.

Delays in construction projects are frequently expensive, since there is usually a construction loan involved which charges interest, management staff dedicated to the project whose costs are time dependent, and ongoing inflation in wage and material prices. Many techniques are used to analyze delays. Some of these methods have inherent weaknesses and should be avoided. This book points out the shortcomings of these faulty methods and explains how a delay analysis should be performed. It then describes specifically how the analysis is done with CPM schedules. A explanation of delays and delay damages, presented in a straightforward, accessible manner, should be useful to public and private owners, construction managers, general contractors, subcontractors, designers, suppliers, and attorneys whose work involves them in the construction industry. The discussion will include subtleties of the process, such as shifts in the critical path, and non-critical delays. The subject of damages is covered in detail, including the major categories of extended field overhead and unabsorbed home office overhead. Likewise, the damages suffered by the owner, either actual or liquidated, are also explained. Finally, a chapter is devoted to managing the risk of delays and time extensions from the viewpoints of the various parties to a construction project. A discussion of early completion schedules and constructive acceleration is also included. In this new ediion, all chapters are updated to reflect the changes in the construction field since the first edition published over l6 years ago. The Second Edition includes over 40% more information such as new methods for analyzing delays with examples of the proper approach. The author also includes a new chapter on risk managment which focuses on the delay-related risks of the various parties in a construction project. Explains the different categories of delays Addresses the concept of concurrency and also non-critical delays Discusses the more common approaches used for measuring and analyzing delays and the strengths and weaknesses associated with them Prevention of Time-Related Delay Problems