How do you define the good life? For many, success is measured not by health and happiness but by financial wealth. But such a worldview overlooks the important things in life: personal contentment, family time, spirituality, and the health of the planet and those living on it. A preoccupation with money and possessions is not only unhealthy, it can also drain the true joy from life. In recent years, millions have watched their American Dreams go up in smoke. The international financial collapse, inflation, massive layoffs, and burgeoning consumer debt have left people in dire financial straits—including John Robbins, a crusader for planet-friendly food and lifestyle choices, who lost his entire savings in an investment scam. But Robbins soon realized that there was an upside to our collective financial downturn: Curtailed consumerism could lead us to reassess our lives and values. The New Good Life provides a philosophical and prescriptive path from conspicuous consumption to conscious consumption. Where the old view of success was measured by cash, stocks, and various luxuries, the new view will be guided by financial restraint and a new awareness of what truly matters. A passionate manifesto on finding meaning beyond money and status, this book delivers a sound blueprint for living well on less. Discover how to • create your own definition of success based on your deepest beliefs and life experience • alleviate depression, lower blood pressure, and stay fit with inexpensive alternatives for high-cost medications • develop a diet that promotes better health—and saves you money • plan for—and protect yourself from—future economic catastrophes • cut down on your housing and transportation costs • live frugally without deprivation • follow in the footsteps of real people who have effectively forged new financial identities The New Good Life provides much-needed hope and comfort in a time of fear and uncertainty. Here is everything you need to develop high-joy, low-cost solutions to life’s challenges. Practical and timely, this book equips you with the skills needed not only to survive but to thrive in these challenging times. From the Hardcover edition.

Who is God? What is God's relation to the world? How is God disposed towards us? What does God ask of us? These questions are not mere intellectual puzzles. They matter for us. A disinterested theology would be no theology at all, for we are fundamentally, at our very core, invested in God. God is the one who concerns us most deeply. Put differently, any theology worth the name is, as Miroslav Volf has put it, theology "for a way of life." We ask theological questions as those whose lives depend on the God whose character we try to articulate in the answers--and also in the asking. How we ask and answer these questions gives shape to our lives. In this volume, published in Volf's honor, leading Christian, Jewish, and Muslim theological scholars reflect on the shapes flourishing human life takes in light of God. Considering concrete questions--from how to talk about suffering to the value of singing in congregational worship--in light of their deep theological commitments, the contributors exemplify the kind of theological reflection our cultures so deeply need. Contributors to this volume: Matthew Croasmun Ryan McAnnally-Linz Marianne Meye Thompson David H. Kelsey Michael Welker Christoph Schwobel Alon Goshen-Gottstein Reza Shah-Kazemi Jurgen Moltmann Natalia Marandiuc Nancy Bedford Nicholas Wolterstorff Lidija Matosević Ivan Sarčević Linn Marie Tonstad

Bertrand de Jouvenel (1903-1987) was known in the United States primarily as a political scientist. His best-known works--On Power, Sovereignty, and The Pure Theory of Politics--all made distinctive contributions to our understanding of the modern state, and to the creation of a political science capable of civilizing that state. His work in the field of economics is relatively unknown in the United States, but like many writers in the contemporary field of political economy, de Jouvenel is not interested in expanding the claims of economy at the expense of polity. On the contrary, his thinking is governed by the oldest and most fundamental of political concerns, the definition of the good life.The good life is not a product of the marketplace, but of deliberate and collective decision--that is, a task for thoughtful citizens and statesmen, and not simply the sum of millions of separate and amoral "consumer preferences." De Jouvenel is well known for his opposition to the distended state, but he was no anarchist. His eloquent warnings to keep the state in its proper sphere were accompanied by a richly sophisticated discussion of what the proper sphere is--an aspect of his work that comes through very clearly in this volume.Written between 1952 and 1980, the essays range from a discussion of technology to reflections on such fundamental economic concepts as "amenity" and "welfare." They include the deeply theoretical as well as the practical and the concrete. All are informed by de Jouvenel's insistence that a science which seeks to understand the production and distribution of "goods" must be concerned in the first place with the good itself. Economics and the Good Life is a companion volume to The Nature of Politics: Selected Essays of Bertrand de Jouvenel. Like the earlier volume, this collection is accompanied by an editor's introduction that places the essays in the wider context of de Jouvenel's work. This work is essential to the libraries of economists, political theorists, historians, and sociologists. 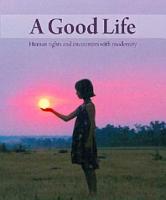 This book is a story. It's a story about ordinary people in very different parts of the world dealing with rapid change in the late twentieth and early twenty-first centuries. It's about times of turbulent and violent social upheaval and rupture with the past. It's about modern times. It's also about being human; what it is to be human in a modernising and globalising world; how, in responding to the circumstances of their times, different groups define, redefine, and attempt to put into practice their understandings of the good and of what constitutes a good life. And it's about how human rights have come to be not abstract universal principles but a practical source of consciousness and practice for real people.

This is the witty, candid story of a daring young man who made his own way to the heights of American journalism and public life, of the great adventure that took him at only twenty years old straight from Harvard to almost four years in the shooting war in the South Pacific, and back, from a maverick New Hampshire weekly to an apprenticeship for Newsweek in postwar Paris, then to the Washington Bureau chief’s desk, and finally to the apex of his career at The Washington Post. Bradlee took the helm of The Washington Post in 1965. He and his reporters transformed it into one of the most influential and respected news publications in the world, reinvented modern investigative journalism, and redefined the way news is reported, published, and read. Under his direction, the paper won eighteen Pulitzer Prizes. His leadership and investigative drive following the break-in at the Democratic National Committee led to the downfall of a president, and kept every president afterward on his toes. Bradlee, backed every step of the way by the Graham family, challenged the federal government over the right to publish the Pentagon Papers—and won. His ingenuity, and the spirited reporting of Sally Quinn, now his wife, led to the creation of the Style Section, a revolutionary newspaper feature in its time, now copied by just about every paper in the country.

Are we born selfish or primed to help others? Does stress make people more antisocial? Can we ever be genuinely altruistic? This book explores some of the dilemmas at the heart of being human. Integrating cutting edge studies with in-depth clinical experience, Graham Music synthesizes a wealth of fascinating research into an explanation of altruism, cooperation and generosity and shows how we are primed to turn off the ‘better angels of our nature’ in the face of stress, anxiety and fear. Using fascinating psychological research but rooted in a clinicians understanding of the impact of stress on our moral and pro-social capacities, The Good Life covers topics as diverse as: The role of parenting and family life in shaping how antisocial or pro-social we become How stress, abuse and insecure attachment profoundly undermine empathic and altruistic capacities The relative influence of our genes or environments on becoming big-hearted or coldly psychopathic How our immediate contexts and recent social changes might tilt us towards either selfish or cooperative behaviour This book makes a unique contribution to a subject that is increasingly on people’s minds. It does not shirk complexity, nor suggest easy explanations, but offers a hard look at the evidence in the hope that we can gain some understanding of how a ‘Good Life’ might develop. Often personally challenging, intellectually exhilarating and written with an easily accessible style, The Good Life makes sense of how our moral selves take shape, and shines a light on the roots of goodness and nastiness.

In April 2009, an inspiring international conference was held at Bielefeld on the topic "Children and the Good Life: New Challenges for Research on Children." The focus was on how we can define and measure a "good life" for children growing up in the modern world. This tied in with discussions on how convincing universalistic theories are, what research on children can contribute, and how children themselves can be integrated into the research process and debates on the "good life." Discourses and the production of knowledge on the "good life" or "well-being" require a guiding idea or a theoretical frame. This frame can come from the feminist ethic of care or from the Human and Children's Rights Convention, from the idea of welfare, or from the Capability Approach. 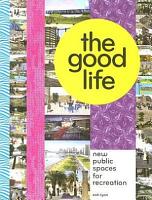 A ball and a wall used to be all you needed for hours of entertainment. But these days, when good design is an expected component of almost every experience, much more is necessary if public urban spaces are to meet the requirements of 21st century recreation and leisure. Sustainability over time and flexibility to accommodate multiple activities, for example, are key requirements. Fortunately, architects and landscape designers have answered the call and produced an amazing array of public spaces for recreation. The Good Life showcases the best and most imaginative new designs from around the globe. Stripped from the structural constraints and serious programs of so many building types, the projects here are designed for fun. But they also demonstrate the role of public spaces in enhancing daily life, fostering social and cultural identity, and contributing to urban regeneration. Zoe Ryan, Senior Curator at Van Alen Institute and organizer of the 2006 Good Life exhibition, edited this volume, with contributions from a broad team of creative experts, including Paola Antonelli, Janet Abrams, Michael Bierut, and Diana Balmori.

Draws on the wisdom and teachings of the ancient Greek philosopher to help readers plan for a more useful, moral, and meaningful life, addressing such profound questions as "How do I find meaning and satisfaction?" and "What are my responsibilities to my community?" 40,000 first printing.

The Good Life Wellbeing And The New Science Of Altruism Selfishness And Immorality By Grahammusic Published By Routledge 2014 256 Pp 14 95 Paperback Book Description: